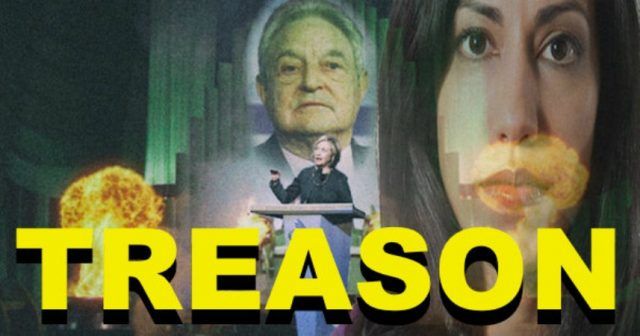 If people would open their eyes and do a little research they’ll know how treasonous Hillary and the Obama administration have been. With Soros at the helm, we’ve experienced more racial divide and violence with him behind the scene. Soros put both Hillary and Obama in power by paying these puppets off. None of them have any interest in building and protecting Americans.

That’s why the only thing I can say is that we are so happy Hillary is not in the White House! Just imagine what would have happened to our country if this lady has won presidential elections!!!

Now, new email by Wikileaks reveals that Hillary Clinton’s relationship with Gorge Soros it was much more personal and frequent that anybody of us assumed.

In an email from Clinton’s right-hand aide Huma Abedin sent to campaign manager Robby Mook and campaign CEO John Podesta, it is very obvious that Hillary was going to wine and dine with globalist George Soros.

Then, immediately after, Huma mentions Soros’ interest in getting Hillary on board with a new political group called America Votes — and he wanted the Democratic nominee to fundraise for them.

Is anyone really surprised by this? This is nothing new. Gorge Soros backed Hillary in the campaign, financed Obama’s campaign and donated to the Clinton Foundation. They are all traitors of the worst sort; people devoid of morality and decency who are bent on bringing down American for their own aggrandizement.

Soros is not done yet. He’s been touted as the prime financier of the current anti-Trump demos around major US cities. We must not let down our guard.

This is not new and you won’t ever hear anything about it on the MSM. He has bought them out too.