Home Culture Did Chuck Norris Participated In Storming Of The US Capitol?

After the shocking riot at the Capitol last Wednesday by Trump supporters attempting to disrupt the certification of the electoral votes naming Joe Biden as president, the Dems have stopped at nothing to portray all Trump supporters as deplorables who support violence and hate our country.

The rhetoric from the left has been nothing less than hypocritical and shocking.

Mainstream media has been all over wiping out anything to do with Trump and supporters of his policies.

And next in line is Chuck Norris.

Back in 2016 legendary martial arts and Hollywood actor Chuck Norris pleaded with Republican voters to support GOP presidential nominee Donald Trump, fearing that a “no” vote would give the Democrats the White House and Congress. Norris first gave his support to Huckabee in the 2016 presidential race and eventually stumping for Ted Cruz after Huckabee bowed out.

In an op-ed, “The People Have Spoken,” for WND.com, Norris — a long-time Mike Huckabee supporter — wrote in an almost breathless tone how afraid he is that the Obama “craziness” would continue with a Hillary Clinton presidency.

However, his support for President Trump could bring him troubles, as these are hard days for Trump supporters.

In the aftermath of Wednesday’s attack on the U.S. Capitol by Trump supporters attempting to block the Congress from affirming the outcome of the 2020 election in president-elect Joe Biden’s favor, a photo appearing to show Chuck Norris with a Trump supporter started circulating on social media.

The image showed a man with an appearance like the legendary actor posing with a Trump supporter, identified as Matthew Bledsoe, in what appears to be the moments before the invasion of the Capitol building. The picture was accompanied with an annotation that read, “Chuck Norris.”

Another photo shows him posing with two other MAGA supporters in Washington, D.C., on the day of the siege.

“Wait, so are we just not going to mention the fact that Chuck Norris was at the MAGA insurrection?” wrote one user, while another commented, “Chuck Norris participated in the storming of the capitol… are we ready to stop treating him like a harmless quirky celebrity yet?”

“Chuck Norris doesn’t fight #MAGATerrorists…he joins them,” opined yet another.

Other Twitter users were quick to debunk the unfounded claim that Norris attended the US Capitol riots. While some pointed out that that the actor/martial artist has light-colored eyes while the man in the photo has dark brown eyes, others drew attention to the fact that Norris was 80 years old and the man in the picture does not appear to look that age.

That isn’t Chuck Norris. Chuck Norris turned 80 this past September and here is a photo from then. Trumpers are just that gullible. pic.twitter.com/ighOhOiKsy

Legit photo of Chuck Norris, found using an image search in less than 15 seconds. His eyes look fairly brown here to me. Lighting and the camera used can have varying results… sometimes small things can be discolored. pic.twitter.com/O49iX5M2Ot

We put the photo through facial-recognition software and the results came back with an 85% match!
Image below: 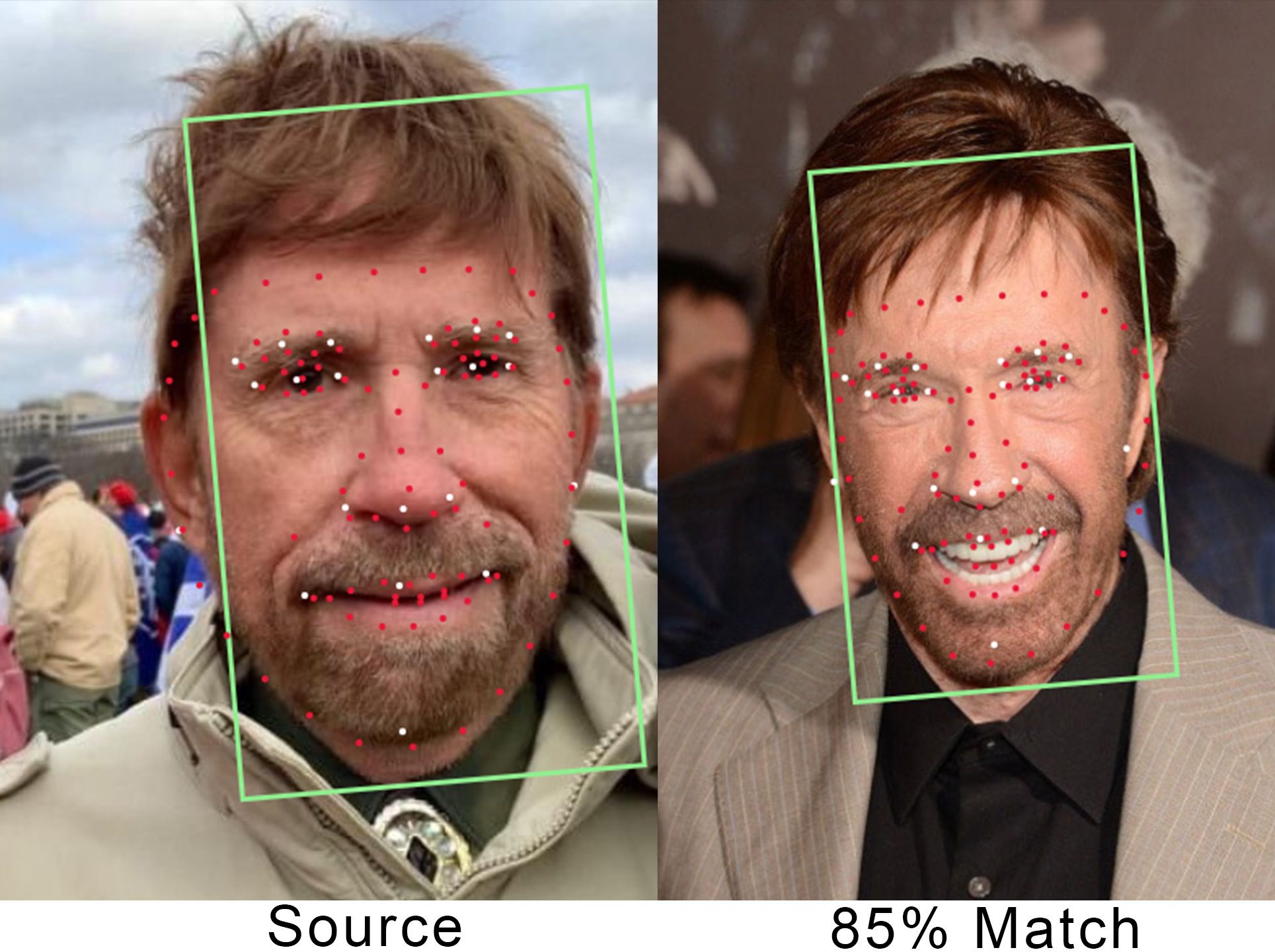 So the man looks like Norris, but we can’t tell for sure if it was actually him. Our other point of view is that the person in the MAGA rally looks a lot younger.

In a video posted online several years ago, the actor revealed that he had always supported the Democrats until the party strayed too far to the left and “lost all reality of what America stood for”.

“So I realized that Republicans at this point in time are more focused on what is best for America than the Democrats are. John F Kennedy today would have been a Republican. What the Democrats believed 40 years, the Republicans believe today”, Norris said.

What do you think?