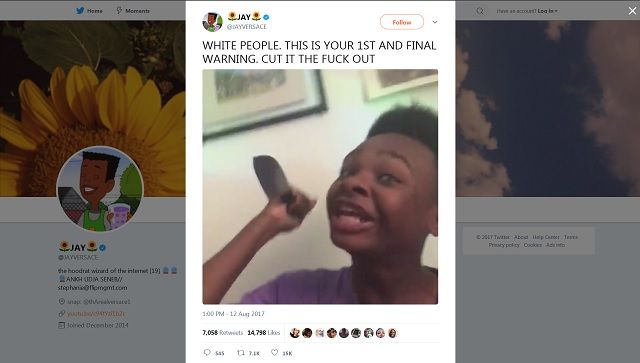 One of the top responses on Twitter to Saturday’s violence in Charlottesville is a “final warning” to “white people” threatening to “burn their neighborhoods down.”

Nineteen-year-old YouTuber “Jay Versace” is seen holding a knife and threatening to destroy “white people” as a race because there’s “way more black people than white people in this motherf**king country, world, and existence.”

“Ya’ll n***as want to burn candles? B*tch, we’ll burn neighborhoods down,” Versace says. “We’ll go all the way to wherever ya’ll motherf**kin’ live and light that whole sh*t up!”

“I’m telling you know, cut it the f**k out. The black person you see right now, is not the same black person you saw in 1923. We a whole new breed, b*tch. And we crazy as f**k, try it b*tch, I f**king dare you, do something, try it,” Versace says ominously.

WHITE PEOPLE. THIS IS YOUR 1ST AND FINAL WARNING. CUT IT THE FUCK OUT pic.twitter.com/vQjk8jkNk6

The threatening video got over 7,000 retweets on Twitter and over 15,000 likes in only four hours.

Versace responded to criticism writing: “I said what I said and if you don’t like it you can suck a caterpillar d**k. Opinion are not accepted. No debate. Suck some d**k.”

I said what I said and if you don’t like it you can suck a caterpillar dick. Opinion are not accepted. No debate. Suck some dick

After one of his followers responded saying, “there’s not more black people than white people in this country,” Versace incorrectly said “there definitely is,” but suggested minorities could unite as a block to burn white neighborhoods down.

Unfortunately, there’s not more black people than white people in this country. That’s one of the root causes of how we got here.

There definitely is. And there was already black people here before slavery. Colored people in general. It’s more of us.

EITHER WAY THEY CAN STILL CATCH THESE HANDS. IDGAF HOW MANY OF US THERE ARE

I wonder why white people don’t want to become a minority?