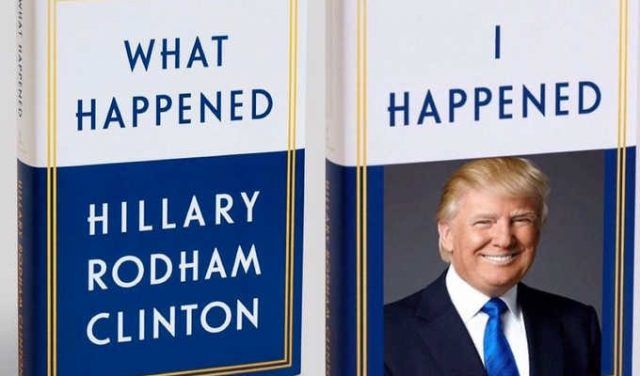 President Trump still take the time to jab at Hillary Clinton from time to time on twitter.

With her incessant whining about all the multiple ways she lost the election save anything to do with the fact that Trump was the better candidate.

Hillary can’t accept the fact Trump totally crushed her in the election FAIR and SQUARE.

She especially deserves to be ridiculed for her dramatic story of being a victim in the second debate because of Trump “stalking” her on stage, which is included in her latest book of excuses.

Even though Trump spent all day Saturday in Texas, comforting victims of Hurricane Harvey and handing out food to those in need, the president took time in the evening to re-tweet a hilarious meme that has been making the rounds on the internet.

The meme was first posted by a Trump supporter, Trumpism 4.0, and shows a mock-up of Clinton’s new memoir, titled “What Happened.” As of Sunday morning, the meme had been retweeted nearly 10,000 times and liked almost 30,000 times.

Hillary is set to do a 15-city tour where she says she’s going to “let loose” and “connect with audiences in a conversation about a story that’s personal, raw, detailed and surprisingly funny.”

In other words, she is going on a speaking tour to give dramatic stories about how she was a victim of the 2016 election at the hands of Russians, Barack Obama, Wikileaks, James Comey and anyone else she can cook up a story on.

If you want to hear all of these fabulous stories from a two-time loser, it might cost you as much as $1,200.

Scroll down to leave a message below.