Home Culture Look What Everyone Missed In Charlottesville “Rampage,” This Changes EVERYTHING 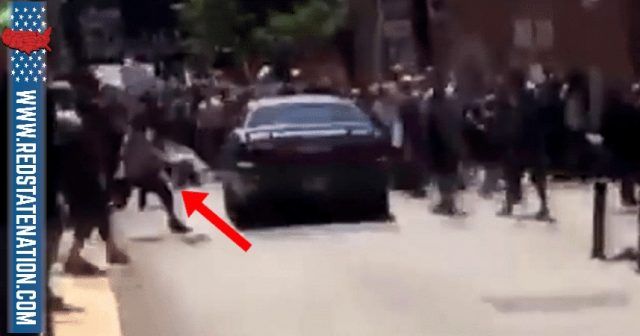 Saturday’s violence at a white nationalist protest rally in Charlottesville, Virginia resulted in the death of a 32-year-old woman and 19 others injured. Then, almost immediately everybody started pointing fingers at him even though all the facts were not released. They assumed he was a crazed Neo-Nazi racist or KKK member who was just out to kill or injure as many of the Black Lives Matter, Antifa, and other protestors were there at the rally.

But there are two sides to every story and one website presented a new possible alternative:

Via Department of Memes:
“On August 12, a driver drove his vehicle into a crowd of “anti-racist” protesters, killing one woman and injuring 19 other individuals. The suspect has been identified as James Alex Fields, Jr.

Department of Memes reported that police officers in Charlottesville believed the driver was not acting maliciously, suggesting he was scared by the protesters on every side of his vehicle and he did not know what to do.

A new shocking video has emerged that corroborates this theory.


Citizen researchers have slowed the video down and spotted an African American individual hitting the car with what appears to be a baseball bat before the suspect hit the crowd with his vehicle. The video shows the driver slowing down, then accelerating quickly after his rear bumper is struck with the baseball bat.

Researchers on /pol/ corroborate the theory that the driver was not acting maliciously and was scared. Read more: https://t.co/iQdPCd0jSq pic.twitter.com/upYVjruaxv

The second video, originally posted to 4chan’s /pol/, is a thorough examination of the events that seem to suggest the driver was behaving normally until his vehicle was struck with the bat. The video freezes at multiple stages, the first at 0:02, to show a bicyclist on the sidewalk behaving normally.

The video then freezes at 0:04 to show the car being operated and normal speeds, and again at 0:10 to show the vehicle struck by what Department of Memes believes is a baseball bat.

The video then freezes at 0:14 to show the car attempt to brake and change direction, and once more at 0:19 as the mob closes in on the car and the driver speeds through them.
Last night it was revealed by a journalist who spoke to numerous officers at a police station in Charlottesville, Virginia that numerous officers believed the act was not malicious and was done out of fear.

To recap: The protesters were standing in the middle of the street, blocking traffic. The car was attacked with a blunt object resembling a baseball bat by a protester. The vehicle was not speeding until a protester attacked and the mob of people closed in on the driver.

If this story is confirmed, then the mainstream media’s narrative about the driver being a white supremacist who sought to kill people at an anti-racism event will be fully blown out of the water.”

We do not want to make conclusions but this looks like Democrat tactic is in play. First, wait for a rally with people they don’t like than gather Antifa thugs and send them in to attack.

Pull back all police to ensure violence ensues and blame anyone that tries to fight back as a violent hate monger.

Then hope something even worse happens that you can scream nationally and pretend total innocence.

One thing for sure, the video proves that some anti-protesters were not peaceful and were armed with baseball bats. This is why everyone needs to calm down and let police investigate EVERY piece of evidence.

What do you think of this? Scroll down to leave a comment below!