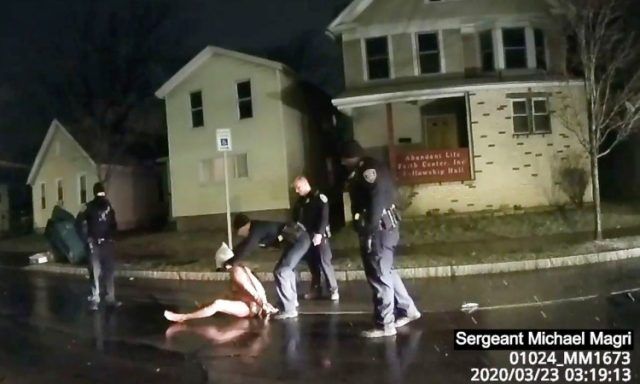 Protests broke out in Rochester, N.Y., following the release Wednesday of police body-camera footage of a Black man who died after being injured during his arrest last March.

Daniel Prude was arrested by Rochester Police in the early hours of March 23, after his brother, concerned for Prude’s safety, had called 911. Prude, 41, had left his brother’s house in below-freezing weather wearing long johns and a tank top. He had been released from Rochester’s Strong Memorial Hospital earlier that night after expressing suicidal thoughts.

When Rochester Police officers came upon Prude, he was naked and in distress. Prude had allegedly just gone on a destructive tear, according to police reports, smashing out the windows of several storefronts and ranting about having the coronavirus. A passing tow truck driver who called 911 described Prude as being covered in blood.

A new video was released today and it shows Prude spitting at one point, then yelling and pleading with officers to let him go before they place a “spit hood” over his head. Moments later when he tries to stand up, they wrestle him down and hold him face down for more than 2 minutes.
Video below:

“How many more brothers got to die for society to understand that this needs to stop?” Joe said as he called for the three officers involved in the arrest to be fired and charged with murder.

Daniel was left brain-dead and died a week later, on March 30, after police were seen in the footage laughing at him as he lay naked and cuffed on the ground during his arrest.

The medical examiner ruled his death a homicide, caused by “complications of asphyxia in the setting of physical restraint, excited delirium [and] acute phencyclidine [PCP] intoxication.”