Dominion’s Eric Coomer who literally wrote the Antifa Manifesto on his Facebook in endless disturbed rants in foaming hate for President Trump installed “Update software” on over 30,000 #Georgia machines RIGHT BEFORE THE ELECTION!

This story seems strange now but the liberal media did a report about it days before the election.

Atlanta News Now reported first about this on September 28th. The software on the state’s 30,000-plus touchscreens was replaced to prevent an issue where the second column of U.S. Senate candidates sometimes didn’t appear. Those candidates included Republican U.S. Sen. Kelly Loeffler and Democrats Matt Lieberman, Ed Tarver and Raphael Warnock. Another Republican candidate, U.S. Rep. Doug Collins, wasn’t affected because his name appeared in the first column.

“The plaintiffs are flagging this as some apocalyptic scenario on social media, and it’s not. This is a very minor issue,” said Bryan Tyson, an attorney for Secretary of State Brad Raffensperger.

The issue, discovered during pre-election equipment testing in Douglas and Richmond counties, occurred when the second column of candidates didn’t appear because of a technical problem with how touchscreens communicated with their underlying Android operating system, said Eric Coomer of Dominion Voting Systems. He said the problem only happened rarely, when users made selections in a specific pattern.

David Cross, an attorney for the plaintiffs, said making a critical software change shows that the state’s voting technology is vulnerable to problems.

He said the software upgrade is being made without adequate security testing or certification from the U.S. Election Assistance Commission. But Coomer said the change is minor and doesn’t require recertification.

Election officials halted testing in the 77 counties where it had begun after they learned about the problem, said Gabriel Sterling, statewide voting system implementation manager.

The new software was distributed to county election offices on USB drives, and they were responsible for installing it on touchscreens as part of the testing process. A company reviewing the new software, Pro V&V, could give its approval by Tuesday, Sterling said.

Social media is swarming around the claims that a current (or former, as his position has been scrubbed from the internet) vice-president with Dominion Voter Systems who previously admitted that it was possible for hackers to hack into their voting systems, allegedly, posted several anti-cop, anti-Trump and, frankly anti-American social media posts.

If you search the company’s profile Eric Coomer has since been removed from their page of directors.

According to the Conservative Daily Podcast host Joe Oltmann, Dominion Voting Systems co-owner and inventor, Dr. Eric Coomer has made social media posts in the past directly connecting him to Antifa. Dominion Voting is based in Denver, Colorado. Coomer graduated with a Ph.D. in Nuclear Physics from the University of California, Berkeley, and began working in the elections industry in 2005 with a company called Sequoia Voting Systems as their Chief Software Architect. In 2008, after Sequoia was acquired by Dominion, Coomer took the position as the Vice-President of US Engineering, overseeing development in the Denver, Colorado office.

With so many questions swirling about Dominion Voting, there are clearly issues if the co-inventor and owner of that company might be connected to the Antifa (idea, myth, organization, way of life, terrorists…You choose).

According to Oltmann, Coomer’s now-deleted Facebook posts include his sharing songs tilted “Dead Cops,” “Dead Prez,” and “ACAB.” One post of particular interest is a long “statement” from Antifa he shared in June in response to President Trump declaring Antifa a terrorist organization.
Oltmann’s account is now suspended below are his tweets:

THESE ARE POSTS THAT ERIC COOMER POSTED IN MAY. NOTICE THE ANTI-AMERICAN SENTIMENT, THE UNDER-MESSAGE IN THESE POSTS. ERIC COOMER IS, A MAJOR SHAREHOLDER IN DOMINION VOTING SYSTEMS, HOLDER OF ELECTION SYSTEM PATENTS AND AN ANTIFA SUPPORTER. BUT HE SOUNDS SANE, RIGHT? #RECKONING

Right Journalism was unable to independently verify the posts’ authenticity; however, Oltmann, the CEO of a tech company and outspoken critic of Antifa, who recently threatened to release the names of suspected Antifa journalists in front of a cheering crowd, confirmed the authenticity of the posts via Twitter.

I WANT TO ADDRESS THOSE ASKING TO VERIFY IF THESE FB POSTS ARE REAL. I RUN A LARGE TECH CO, I SIGNED AN AFFIDAVIT CERTIFYING EVERYTHING I PUT OUT TO BE THE TRUE. I AM 💯 POSITIVE IT IS THE REAL ERIC COOMER, WHO IS ALSO CURRENTLY TRYING TO PURGE THE INTERNET. #RECKONING #TOOLATE

Another post, allegedly captured before the page was scrubbed shows a clear bias towards the President and interestingly enough, refers to the then-presidential candidate as a fascists’ and tells anyone on his friends list to “unfriend me now” if they plan on voting for him.

One of the most interesting, and possibly concerning, social media posts appear to be a copied and pasted post reportedly found on Coomer’s Facebook page: A long…. and, well, almost ranting June Facebook post titled a “PUBLIC STATEMENT FROM ‘ANTIFA’ IN RESPONSE TO THE THREATS ISSUED BY UNITED STATES PRESIDENT DONALD TRUMP” signed, “Best Regards, ‘AntiFa’”.

The “statement” was seemingly issued because “both the ‘president’ and the media insist on acting as though ‘AntiFa’ is this big, scary organization.” The post is contradictory at times. Early in the post, the author writes Antifa “supports and defends rights.” Later says it “isn’t a thing” because, “’ Antifa means ‘Anti-Fascism. The only position that opposes that is fascism. In the end, there is no ‘organization that you can ‘declare terrorists’”. The author threatens war and says, “none of us wants to see the death toll” from such a conflict. Read the full post below. 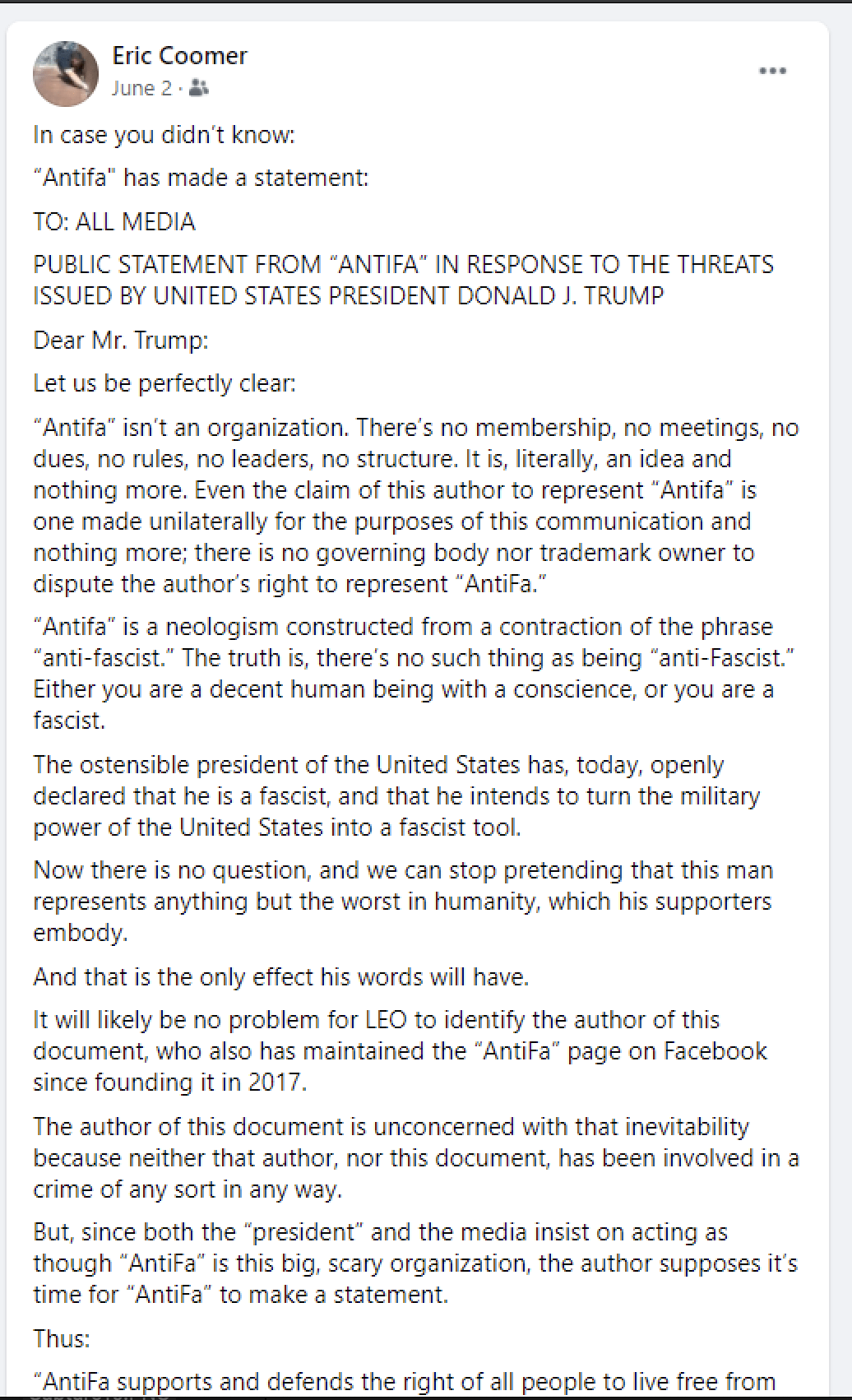 Michelle Malkin interviewed Joe Oltman where reveals how he infiltrated Antifa and how during a conversation with Antifa members, he discovered “Eric from Dominion” was allegedly part of the chat during the week of September 27, 2020.

Oltman alleged that “Eric” was telling the Antifa members they needed to “keep up the pressure.” When Oltman asked, “Who’s Eric?” someone answered, “Eric, he’s the Dominion guy.” Oltman said that as the conversation continued, someone asked, “What are we gonna do if F*cking Trump wins?” Oltman paraphrased how Eric (the Dominion guy) responded, “Don’t worry about the election, Trump’s not gonna win. I made f*cking sure of that!”

What do you think about this?

Video: Suspect Attacks And Beats Several Random Strangers On The Street, Then Comes Face-To-Face With MMA Fighter And Things Got Awkward

Gang Of 3 Attempts A Robbery But It Goes Very Bad...