Home Culture WHITE children Are Allegedly Being Denied Enrolling Into The School Of Their...

If the ability of parents to choose schools is a precondition for disproportionate concentrations of students of the same background in some schools, then it is important to examine school segregation in the context of school choice writ large. In many large school districts, parents are able to choose among traditional public schools, not just among charter or magnet schools. We know little about the effects of choice in this context.

Lately, our country looks like forgot the days of the segregation and now it seems that we are having some sort of reverse racism.

On Twitter user named Sam Ghannoum tweeted yesterday:
So My Kids Can’t Go To Jessieville Because They Are ‘White’ and posted a photo proof: 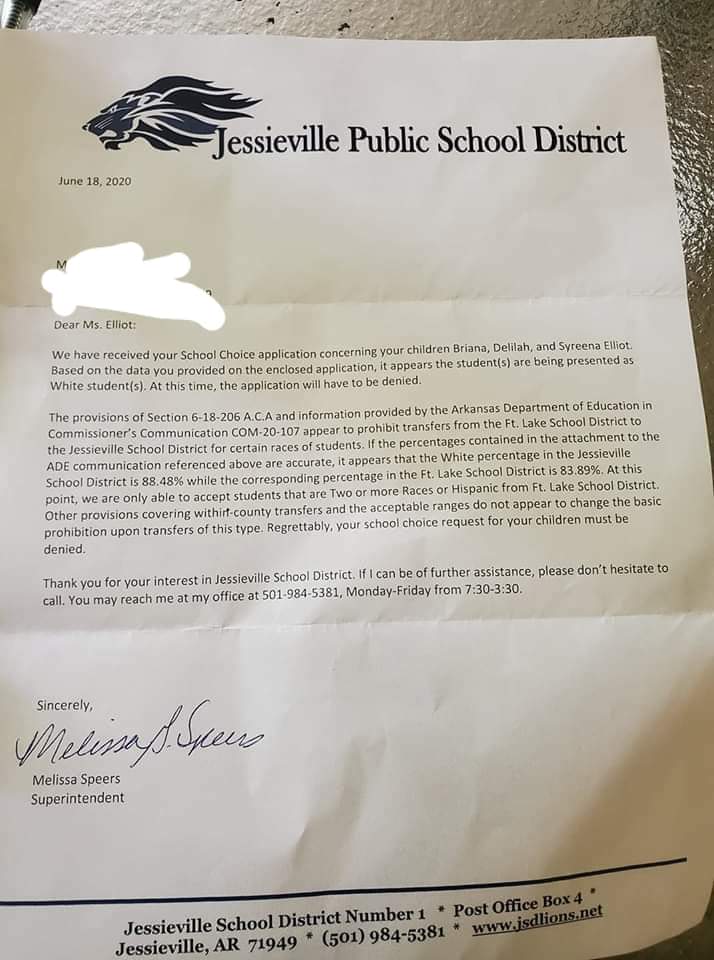 This isn’t new. Schools, especially gifted schools, have had minority quotas for years. 20 years ago my youngest son was denied entry into a gifted school because they had all the white kids they could take. The rest had to be a minority, even if they scored lower on the tests.

So we decided to investigate this case and we here are the breakdown of “acceptable ranges” of the ethnic mix.

We looked up this Arkansas restriction and it reads: (see below)
Still seems a little strange.

We may not like this answer but the law was passed by the legislature who represents their constituents. This is a symptom of the Silent Majority being SILENT and NOT PAYING ATTENTION as laws are being passed. The solution is simple requires involvement & contacting your State Rep:

It’s time for a change, I believe all kids should be given a number so the schools cannot tell race, the gender of financials. Admit STRICTLY on merit.

Denying school acceptance based on the color of their skin is not only “racist” it is “Discrimination!”