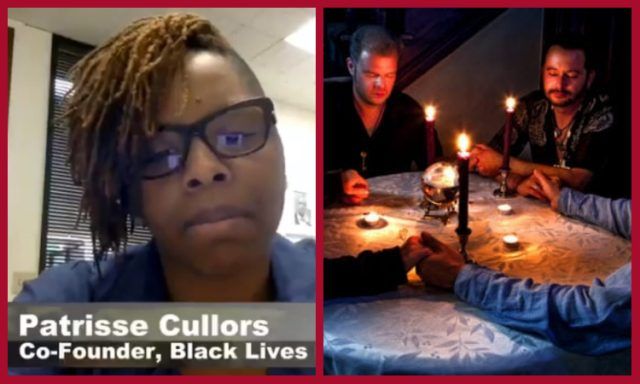 The Black Lives Matter movement is not only anti-police, anti-white, anti-capitalist but also proudly neo-Marxist.

Patrisse Cullors is an American artist and activist. Cullors is an advocate for prison abolition in Los Angeles and a co-founder of the Black Lives Matter movement. She also identifies as a queer activist.

That’s what the mainstream media and the Wikipedia page will tell you.
But it won’t tell you that she is a trained Marxist.

She confirmed back in 2015 that they’re proudly Marxists.

BLM founder Patrisse Cullors, reassuring an old communist that she understands that the goal is to destroy freedom: “we’re trained Marxists.” pic.twitter.com/x8sljI05Av

It doesn’t end there because her anti-Christ stance isn’t coming just from her Marxists agenda, she is also admits to dabbling with the occult.

She celebrates this in her so-called “artwork.”

From  The New American:

Of course, Christians, pointing to Ephesians 6:12 and its reference to spiritual warfare, have been making this argument since the fruit of BLM became more clear: destruction, hate, looting, burning, Marxism, division, riots, and more. But until recently, the spiritual nature of the struggle was simply inferred and deduced from the Bible and the news. Now, the proof is available to all.

In a recorded conversation with Cullors, BLM Los Angeles founder and California State University Professor of “African Studies” Melina Abdulla reveals more than she thought she should have. “Maybe I’m sharing too much, but we’ve become very intimate with the spirits that we call on regularly, right.” she explained. “Like, each of them seems to have a different presence and personality, you know. I laugh a lot with Wakisha, you know. And I didn’t meet her in her body, right, I met her through this work.”

Cullors echoes the sentiments of Abdulla. “It’s a very important practice, um, hashtags are for us, are way more than a hashtag, it is, um, literally almost resurrecting a spirit so they can work through us to get the work that we need to get done,” said Cullors, one of the three founders of BLM. “I started to feel personally connected and responsible and accountable to them, both from a deeply political place, but also from a deeply spiritual place.”

“Always, you know, in my tradition you offer things that your loved one who passed away would want, you know, whether it’s like honey or tobacco, things like that,” the trained Marxist and BLM co-founder continued. “And that’s so important, not just for us to be in direct relationship to our people who’ve passed, but also for them to know we’ve remembered them. Um, I believe so many of them work through us.”

Cullors also admits that the very first thing BLM leaders do when they hear of a “murder” is to pray to the spirits and “pour libation.” Again, she emphasized, this is not just about “racial and social justice.” “At its core, it’s a spiritual movement,” she continued. “You can’t pretend like that work is just organizing work. That’s, you know, that’s some serious stuff.”

The whole “say his name” mantra also has deep spiritual significance, according to Cullors. “When we say the names, right, so we speak their names, we say her name, say their names, we do that all the time that, you kind of invoke that spirit, and then those spirits actually become present with you,” she explained, revealing something that virtually none of the “useful idiots” attending BLM rallies understand.

The mainstream media failed to report the rise of the anti-Christ stance in the ranks of BLM.

This protest was a week ago but was ignored by the liberal media.

BLM Marxists attacked a man chanting “the blood of Jesus” in Charlotte, #NorthCarolina. Via Facebook -Sam L Bethea.
BLM/Antifa/NOI have publicly announced their intentions to kill Christians & nonChristians, steal their possessions and destroy the West.pic.twitter.com/EZo5nyuhrX