America has had enough of these ridiculous NFL players who refuse to stand during the national anthem. But if they continue with this behavior, pretty soon they’ll be playing in an empty stadium. No fans, no cheering, no nothing. They’ll have to wonder if it was really worth it as they’re being told they no longer have a job.

EMS union president Daniel Nemeth said it sounded great until a group of Browns players took a knee during the anthem.

“This hit home with me. I am a veteran, an 8-year veteran with the U.S. Marine Corp. So, to disrespect the flag by taking a knee is not something I was going to be a part of,” Nemeth said.

We tracked down police union president Steve Loomis out of state at a police convention.

“I’m here at a national police convention, and soon as they hear that I’m from Cleveland, the first question is ‘What about those stinking Browns?'” Loomis said. “So if the ownership of the Browns and the league are going to allow that type of stuff to happen, and then come to us and say, ‘We want you to help us with the flag,’ that’s hypocritical. We’re not gonna participate.”

The stadium sits just steps away from city hall. The FOX 8 I-Team learned the stand being made by the safety forces was discussed by the city’s top brass. A city spokesman said the police have been told the Browns will replace the officers, paramedics and firefighters with members of the military.

Not standing for the national anthem is a sign of disrespect, which should never be allowed!

If they continue with this behavior, pretty soon they’ll be playing in an empty stadium. No fans, no cheering, no nothing. They’ll have to wonder if it was really worth it as they’re being told they no longer have a job.

What do you think?

Videos: Flight Staff Caught Making Anti-Semitic Celebration As Jewish Family Was Removed From Flight When Their 15-Month-Baby Couldn’t Keep The Face Mask On 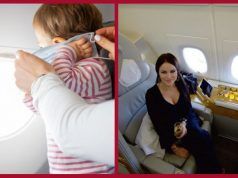