Home Politics Foreign Politics Footage Shows A Large Truck As He Crashes Through The Gates Of... 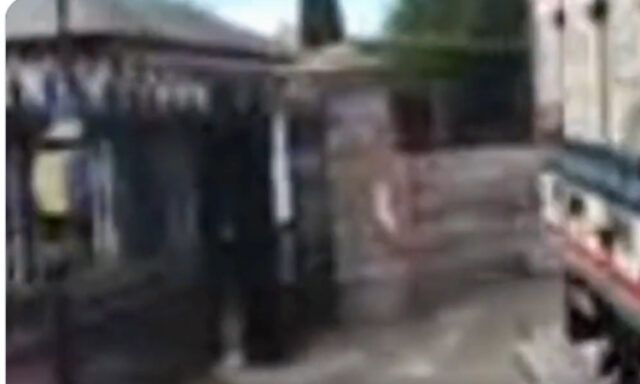 On Monday afternoon, a large truck smashed through the gates of the Russian embassy in Dublin. Roads near the embassy have been closed.

Shaky footage shows the truck reversing at speed into the iron gates outside Russia’s embassy on Orwell Road, while onlookers cheer.
Video below:

An employee at the company told Buzz they had “no comment” and knew nothing further about the incident.

A printed-out sign pasted in the front window appears to read “murder woman and also children” in Russian.

A garda spokeswoman said: “Gardaí are investigating an incident of criminal damage that occurred at a property on Orwell Road this afternoon, Monday 7th March 2022 at approximately 1.30 pm.

“One male was arrested and taken to Rathfarnham Garda Station where he is currently detained under Section 4 of the Criminal Justice Act, 1984.

It comes after a number of demonstrations at the site recently after Russia’s invasion of Ukraine, and the person who was arrested was part of the protest that was organized in support of Ukraine!

On Saturday, a Catholic priest threw red paint at the gates as a protest against the war. Father Fergal MacDonagh of the Dolphin’s Barn/Rialto parish told the Irish Times he was “delighted and proud”, calling the embassy a “building that is spreading lies, deceit and misinformation about what is happening”.

Russia’s ambassador to Ireland Yury Filatov has called the protests “very aggressive” and alleged his staff were receiving death threats.

He said, “At present, we’re dealing with an extremely tense situation in the embassy. Our employees are constantly receiving death threats at their home addresses, by email and by telephone.”