Relations between the Japan and North Korea are severely strained and marked by tension and hostility.

According to a 2014 BBC World Service poll, 91% of Japanese people view North Korea’s influence negatively, which is the most negative perception of North Korea in the world.

North Korea is now becoming a nuclear threat from a volatile and belligerent dictator, Kim Jong-un.

Being North Korea is in close geographic proximity to Japan, Japan is now considering something it never considered before — a preemptive strike.

Japan is debating whether to develop a limited pre-emptive strike capability and buy cruise missiles – ideas that were anathema in the pacifist country before the North Korea missile threat.

With revisions to Japan’s defense plans underway, ruling party hawks are accelerating the moves, and some defense experts say Japan should at least consider them.

Japan has a two-step missile defense system, including interceptors on destroyers in the Sea of Japan that would shoot down projectiles mid-flight and if that fails, surface-to-air PAC-3s on land.

In a pre-emptive strike, by Japanese definition, cruise missiles, such as Tomahawk, fired from destroyers or fighter jets would get the enemy missile clearly waiting to be fired, or just after blastoff from a North Korean launch site, before it approaches Japan. 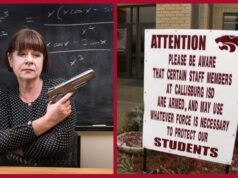 Another State Fights For Arming Teachers, But The Teachers Union Fights Back