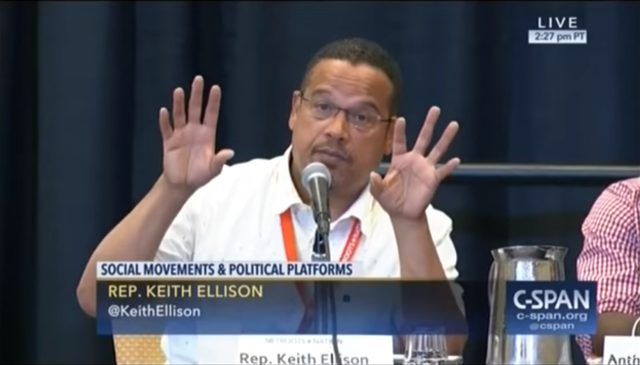 Minnesota Congressman Keith Ellison is one of the top leaders in the Democratic Party who does a great job of helping to make people flee from electing them into office.

What can be said about Ellison that would make any informed, sane person want to have anything to do with a party whose vice chairman is a Hamas sympathizer, has met with people who fund suicide bombers and many other things that show he is aligned with radical Islamic terrorism.

Over the weekend Ellison showed us that he is also partial to brutal Asian dictators by giving his approval of Kim Jong-un. Yes, the North Korean dictator who starves and terrorizes his own people and threatens to wipe out masses of people with nuclear weapons.

“North Korea is a serious thing. You have this guy making bellicose threats against somebody else who has very little to lose over there. Kim Jong Un, the world always thought he was not a responsible leader. Well, he is acting more responsibly than this guy is. And but I’m telling you is that once you start seeing missile launches, you’re going to see the time for cranking up the antiwar machine is right now,” Ellison said. “So, if you don’t want to get caught deer in the headlights, start calling for diplomacy in North Korea immediately.”


“This guy” he is referring to is President Trump. These comments came after North Korea threatened to bomb Guam and amid news that the regime had developed a nuclear warhead small enough to fit on a missile. In response, Trump vowed to deliver “fire and fury” should North Korea follow through on their threats.

After outrage, Ellison took back his statement, sort of.

In a short interview after the speech, Ellison dialed back the Kim-Trump comparison.

“That was one of those I wish I’d not said,” Ellison said. “It’s tailor-made for somebody to misuse. I’d say he’s being incredibly irresponsible and he’s putting us in a situation where you could have an accidental launch. I mean, his rhetoric might make Kim Jong Un think that he needs to strike first. What we need is someone bringing calm to the situation, not spiking it.”

In reality, President Trump has stood strong, like a leader should while Kim Jong-un backed down from his Guam threat.

Keith Ellison is a clown and has no idea what he is talking about. He is intentionally being against everything that Trump does for partisan political purposes.

Over the last eight and a half years, it is clear that the Democrats have no idea what they are doing with their crack-pot leadership, terrible policies, identity politics, emotional misdirection, and conspiracy theories.

Is it any wonder why Democrats are not being taken seriously?