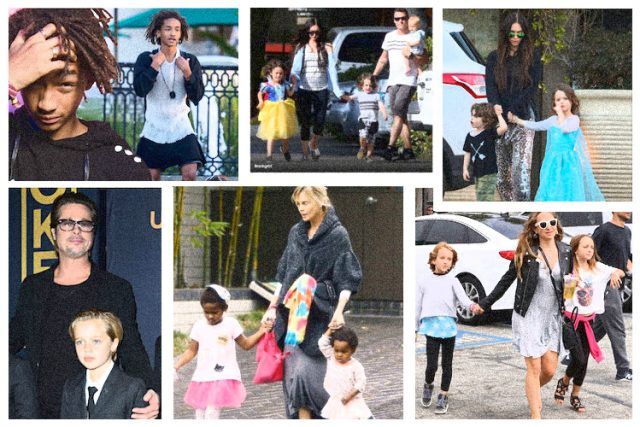 How insane is it that the mainstream and liberal media are working to eliminate the concept of gender? It isn’t that complicated. Boys have a penis, and girls have a vagina. It is not some high level philosophical construct that passes over the heads of even the greatest intellectuals and biologists. This is kindergarten level knowledge.

Yet, gender neutrality, binary gender, transgender, or whatever else you want to call it, is being rammed down our throats by social engineers, and as more media attention is given to the virtues of erasing biology in favor of mental illness, the issue becomes more culturally acceptable.

Leading the charge are warped and out of touch celebrities who seem to be operating from a singular directive to set an example for people who learn how to parent by watching television and reading People magazine. Parading their children around in front of the paparazzi for the whole world to fawn over, many of these entitled, self-righteous, and disconnected celebs are playing their part in helping to transform society into a confused, mindless mass of group-thinkers.

It seems innocent enough when one of these mega stars steps out in public making a spectacle of their children, and there certainly is no harm in a little boy wearing a pink princess dress once in a while, but when so many celebs are marching to the same tune, it makes you wonder what the real message here is.

Take a look at these examples…

Famous pop singer Adele is being applauded as a heroine for the cause of gender neutral parenting.

Jaden Smith, son of superstar Will Smith supposedly hopes that his ‘gender fluidity’ will pave the way for others to wear whatever they want. In truth people can already wear whatever they want. Men have been dressing in drag since time immemorial. It’s not a big deal. His gender isn’t changing, he’s still presumably got the biological anatomy of a male, but this mainstream news outlet is parading his clothing preferences around as part of a broader push for gender confusion in a changing culture.

Brad Pitt and Angelina Jolie, world superstars, are being praised for supporting their child’s exploration of gender identity. Who’s praising them?

In this article it is explained that the couple is allowing their daughter to dress and act like a boy. So what? Is the kid really old enough to understand the complexities of sexual identity? Probably not, but the fact that the media is proud of this achievement is again a sign that some other greater agenda is in play here.

It gets weird, though, when you hear, as some media outlets have reported, that this kid will soon be receiving hormone treatment as a precursor to an actual sex change, although this detail is difficult to corroborate.

American actress and model Megan Fox is being lauded for allowing her son to don a Snow White dress, and as usual, the article makes a big deal out of gender stereotypes, as though this child is performing some heroic act of social activism to save the lives of a group of terribly oppressed people.

“But not only that, the fam completely bashed gender stereotypes as their oldest boy was wearing a super cute Snow White costume. Even better, it’s not the first time their sons have been photographed wearing clothes that, traditionally, are meant for girls. Way to emphasize the importance of self-expression, Brian and Megan!” [Source]

Actor Toby Macguire and his ex-wife made headlines with an afternoon outing with their son Otis dressed in a girl’s skirt. Hooray for Hollywood, but really, so what? Why is the media making a point of all this?

Actress Charlize Theron is praised for raising a gender neutral son, and the media loves to talk about it. Here’s her boy in a pink tutu with a pink handbag.

What’s really driving this? And who benefits from a gender confused society, where appreciating biological gender identity is some sort of new hate crime? It seems that this type of agenda can really only serve some nefarious end because pushing gender confusion on to children who are too young to fully understand their children only serves to create a future where traditional male and female roles are outdated, and the biologically inherent tendencies of each gender are erased.

The American College of Pediatrics has come out and said that transgenderism of children is child abuse. It’s a way of robbing children of their biological identity before they have a chance to blossom or even to understand the nature of being a man or a woman. It’s a serious mind twister, and an age where mainstream media is pushing all kinds of social engineering on the population, the transgender agenda only serves to further destroy traditional values and basic notions of masculine and feminine identity. In the end, it is the individual that loses, as the madness of the collective serves to confuse, and to celebrate freakish deviations from our natural ways of being.

Tabitha Mercy is a staff writer for Waking Times, where evolution and revolution unite, and for Offgrid Outpost.

This article (Leading Celebrities Pushing the Transgender Agenda Onto Children) was originally created and published by Waking Times and is published here under a Creative Commons license with attribution to Tabitha Mercy and WakingTimes.com. It may be re-posted freely with proper attribution and author bio.