Home Politics Overnight Michigan Allegedly “Found” 138,339 Ballots All Of Them For Biden 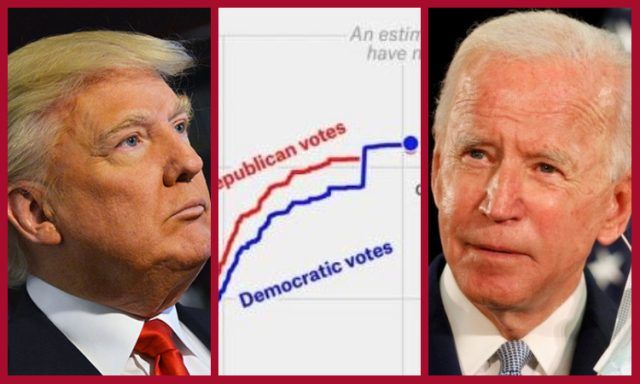 Initially, Trump shocked pollsters – again – after winning Florida by a whopping 370K votes where a surge in Hispanic support crippled hopes for a Biden landslide, followed by wins in Ohio and Texas. The early momentum saw Trump’s winning odds at online bookie Betfair surge as high as 80%. However, the momentum reversed after Biden managed to “flip” Arizona back to blue while the outcome remained unclear in six swing states — Georgia, Michigan, Nevada, North Carolina, Pennsylvania and Wisconsin — all of which are still counting votes, and while we may get some final vote counts today, others could take a few days.

Michigan’s top election official said on Wednesday morning the state’s presidential results could be known by the end of the day.

“We’ll know much more in the hours to come, and we’ll have a much more complete picture of Michigan by the end of today,” Secretary of State Jocelyn Benson said on CNN.

President Trump had a sizable lead in Wisconsin and Michigan but this morning Joe Biden somehow took the lead.

Yet some pointed out a bizarre pick up in Michigan Biden votes, who picked up 138K votes without a single vote going to Trump:

Said otherwise, as the Federalist’s Sean Davis notes, Democrats in Michigan “magically” found a trove of 138,339 votes, and all 138,339 of those “votes” magically went to Biden?

So while everyone was asleep and after everyone went home, Democrats in Michigan magically found a trove of 138,339 votes, and all 138,339 of those “votes” magically went to Biden? That doesn’t look suspicious at all. https://t.co/6w1MFoVhfg

OK. So both Michigan AND Wisconsin have VERTICAL LINES where Biden votes are injected in.

We contacted Michigan election officials but they didn’t respond to our inquiry.