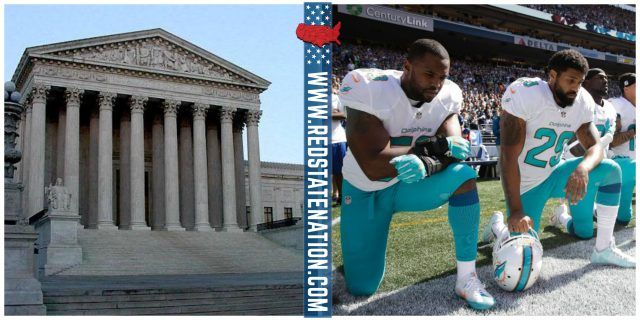 America has had enough of these ridiculous NFL players who refuse to stand during the national anthem. But if they continue with this behavior, pretty soon they’ll be playing in an empty stadium. No fans, no cheering, no nothing. They’ll have to wonder if it was really worth it as they’re being told they no longer have a job.

O’Neill, who is the only Democrat on the high court and a retired lieutenant colonel in the U.S. Army and Ohio National Guard wrote that he is disappointed in the actions of the NFL players.

He wrote: “Congratulations Cleveland Browns on your win. Unfortunately, my season ended last night. I will NEVER attend a sporting event where the draft dodging millionaire athletes disrespect the veterans who earned them the right to be on that field. Shame on you all. William O’Neill, LTC, US Army, Retired. Vietnam veteran; son of a World II veteran; proud father of an Iraq veteran.”

The 12 Cleveland Browns players kneeled and formed a circle on the sideline during the anthem Monday. Tight end Seth DeValve said he wanted “to pray for our country.”

However, many have questioned O’Neill’s Facebook post, saying he has no respect for the First Amendment of free speech, while claiming he wrongly created a connection between the national anthem and respecting troops.

But, O’Neill had the perfect reply to this accusation in a comment:

He wrote: “I will not pay to witness the disrespect of the American flag. It really is that simple. Yes folks. You have freedom of speech. I also have the freedom of not paying $75 to listen to you. And if freedom of speech is so clear here. Why not burn the flag on the 50-yard line.”

The response from O’Neill comes as the NAACP has requested a meeting with NFL Commissioner Roger Goodell to discuss why Colin Kaepernick has not been signed by any team in the NFL.

The first amendment protects the citizens speech/right to assemble/press – from GOVERNMENT. The government is not involved one bit here. There is no protected “right” to expression or protest while you’re on private property working for your employer. To the contrary – the league and owners – should lay down rules (like some teams have) and forbid “stunts” like this – the league and owners have actual rights to admonish or terminate employment of said employee. Tons of case law supporting this – all the way up to the US supreme court.
With that said – the league & Browns management – by allowing this behavior & incorrectly citing “freedom of expression” like so many of you are doing – are complicit and just as guilty.

Guilty of what you ask? Look up the federal law – US Code – which dictates proper behavior during our National Anthem. Is it a criminal offense? No. But it is the law of the land nonetheless & these players broke it.

Now, someone tells me how any of these National Anthem “stunts” have done one bit of good or helped any of the dozen “causes” the players are claiming? They have actually widened the divide, alienated many who might otherwise support one of the “causes” and shown utter disrespect to veterans like myself and especially those who have given their lives for this great country. It’s reprehensible.

One positive that has come out of this? Real Americans – who know their actual rights and love their country – are uniting. I’m mostly conservative – but would absolutely cast a vote for this Democrat judge based on this oh so important issue alone.

Do you agree with Justice Bill O’Neill?