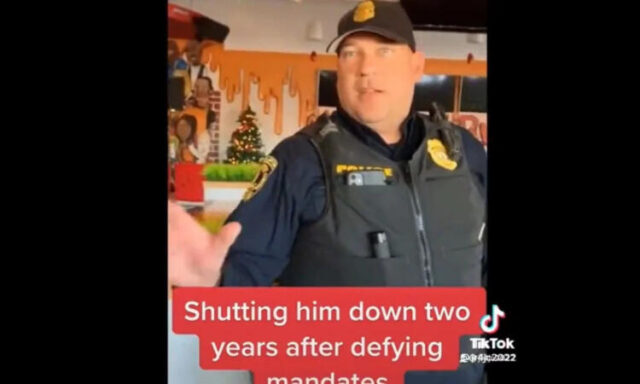 Matt Strickland, an Iraq War veteran, is a business owner and candidate for state senator in Virginia.

On Friday Virginia state sheriff’s deputies and police entered his establishment and told him they were shutting him down.

Strickland refused to shut down during the pandemic two years ago. He had to feed his family and did not want to lose his business.

This man .@MattForVA kept his business open during Covid and ignored the mandates, so the state suspended his licenses and just raided his business. pic.twitter.com/OWeHyI8dTQ

Strickland lost his liquor license for refusing to shut down, mask up, and destroy his livelihood at the behest of a government making orders that did absolutely nothing to stop a respiratory virus that was largely only lethal to the elderly.

The state then tried to strong-arm Strickland into admitting his guilt and assuming financial responsibility for the fiasco by telling him it would only slap him on the wrist if he paid the government $10,000.

When the media tells you he “did not comply,” understand the framework of abject tyranny that surrounds the situation.

“Despite administrative proceedings and the final order of the Circuit Court of Spotsylvania County affirming Virginia ABC’s decision to suspend Gourmeltz’s wine/beer on and off-premises and mixed beverage licenses, the establishment failed to comply with ABC’s Board Order and continued to serve beer, wine and mixed beverages to customers,” ABC wrote in a press release.

In January 2021, authorities pulled Gourmeltz’s health permit for “not following the COVID-19 public health requirements in the governor’s Executive Order.”

In March 2021, Strickland was dragged into court because he “knowingly ignored the Code of Virginia § 4.1-225 2.a.” The Virginian Attorney General’s office sued him for not requiring his employees to wear masks and social distance.

He was scheduled to lose his liquor license on March 31, but bureaucrats decided to grant Strickland the “opportunity” of fighting the decision through a lengthy, multi-month court battle that few regular people are financially, emotionally, or professionally skilled enough to handle. Still, Strickland soldiered on with the appeals process to get justice.

When the court finally ordered his license to be suspended for 90 days unless he paid the government for the pleasure of being dragged into an exhaustive court battle, he told them to get lost.