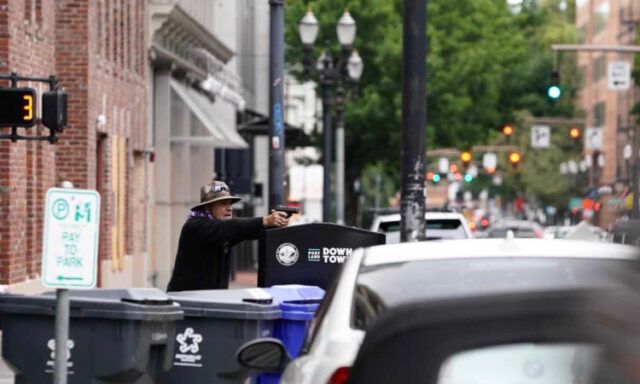 Portland, Oregon descended into violence on Sunday, as intense clashes broke out between Antifa and Proud Boys.

One man was arrested for firing a gun at demonstrators, a car was broken into, and an ambulance truck was flipped.

Luckily, no injuries have been reported.

Portland has become a magnet for Antifa rioters given the city’s liberal stance.

Portland police arrested a man, later identified as 65-year-old Dennis G. Anderson, on Sunday afternoon after he allegedly opened fire with a handgun.

Footage filmed close to Southwest 3rd Avenue and Southwest Alder Street, where Anderson was arrested, showed a man firing a handgun from behind a garbage can and also appearing to dodge gunfire.

Other videos taken nearby show the man lying face down on the sidewalk as several officers arrest him.

In another angle as you can see the guy behind the recycling can apparently shoot first, then someone else returns fire:

An arrest was made soon after:

Arrest made of the shooter. Will post more soon. pic.twitter.com/h466xxIj1r

A video leading up to the shooting, where you can see the guy with the hat backing away holding his gun out to the side as others are walking him back, including what appears to the shooter with his gun drawn and leveled at the guy:

Here’s the first video of the incident taken by me. Talking to other journalists on scene to find out exactly what happened and will release full video shortly. pic.twitter.com/yd9opDFdtx

The press release from the Portland Police Bureau only references a single “suspect” shooting, and makes no mention of the other party firing more shots.

Even do Drew Hernandez may have caught the other shooter on camera, as well-known Antifa militant Luis Marquez is seen berating one of his comrades!

PORTLAND: “I WILL BEAT THE F*CK OUT OF YOU”

Luis Enrique Marquez was on a good one today, he was even threatening members of ANTIFA pic.twitter.com/38UBzPseFr

The police try to protect the ones who want to defund them!