Ukraine has a genuine Nazi problem — both past and present. It would be a dangerous oversight to deny Ukraine’s antisemitic history and collaboration with Hitler’s Nazis, as well as the latter-day embrace of neo-Nazi factions in some quarters.

On the eve of World War II, Ukraine was home to one the largest Jewish communities in Europe, with estimates as high as 2.7 million, a remarkable number considering the territory’s long record of antisemitism and pogroms. By the end, more than half would perish. When German troops took control of Kyiv in 1941, they were welcomed by “Heil Hitler” banners. Soon after, nearly 34,000 Jews — along with Roma and other “undesirables” — were rounded up and marched to fields outside the city on the pretext of resettlement only to be massacred in what became known as the “Holocaust by bullets.”

The Babyn Yar ravine continued to fill up as a mass grave for two years. With as many as 100,000 murdered there, it became one of the largest single killing sites of the Holocaust outside of Auschwitz and other death camps. Researchers have noted the key role locals played in fulfilling Nazi kill orders at the site.

Nowadays, Ukraine counts between 56,000 to 140,000 Jews, who enjoy freedoms and protections never imagined by their grandparents. That includes an updated law passed last month criminalizing antisemitic acts. Unfortunately, the law was intended to address a pronounced uptick in public displays of bigotry, including swastika-laden vandalism of synagogues and Jewish memorials, and eerie marches in Kyiv and other cities that celebrated the Waffen SS.

Just as disturbing, neo-Nazis are part of some of Ukraine’s growing ranks of volunteer battalions. They are battle-hardened after waging some of the toughest street fighting against Moscow-backed separatists in eastern Ukraine following Putin’s Crimean invasion in 2014. One is the Azov Battalion, founded by an avowed white supremacist who claimed Ukraine’s national purpose was to rid the country of Jews and other inferior races. In 2018, the U.S. Congress stipulated that its aid to Ukraine couldn’t be used “to provide arms, training or other assistance to the Azov Battalion.” Even so, Azov is now an official member of the Ukraine National Guard.

We can’t deny what we’ve seen with our own eyes.

So many members of the Ukraine Army have neo-Nazi tattoos and they’re not embarrassed about it or trying to hide it.

The mainstream media basically ignored the Neo-Nazi stuff, but after many in right-wing media outlets noticed the swastikas and started calling them out, the Azov battalion tried to “re-brand” themselves.

But it appears to be more than just this one group of fighters.

When you scroll down the article, there are a set of 24 images you can scroll through and when you get to the 4th photo, you’ll see this picture of a man looking inside van that’s riddled with bullet holes.

The caption of the image says this: “A local resident inspects a damaged van following a military strike, amid Russia’s attack on Ukraine, at a residential area in Kharkiv, Ukraine June 8, 2022. REUTERS/Ivan Alvarado” 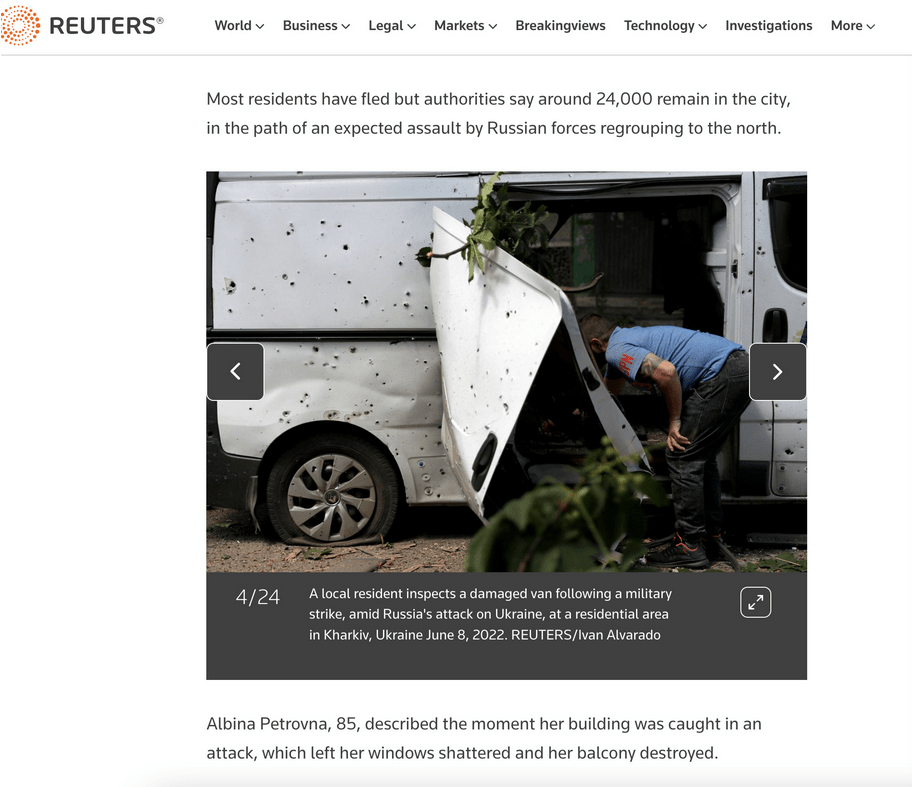 But when people zoomed in on the photo, they were horrified at the man’s tattoo.

I don’t think we’re getting the whole story about what’s really going on in Ukraine.

Personally, I think both Russia and Ukraine have a lot of issues and they should work out their differences in the region, with their neighbors, and with no input from the American people, except for some humanitarian aid from private sources.

(This post may contain disputed claims. We make no assertions as to the validity of the information presented by our Opinion Columnist. This is an opinion article, and this post should be treated as such. Enjoy.)